A Guide to Using Build Mode in The Sims 4: Jungle Adventure

There is a lot to do in the new game pack The Sims 4: Jungle Adventure. This includes for your inner architect. So, if you want to know how to build tree houses and other structures in the game, you may need some help. You will find all of the instructions that you will need in this post:

From archaeological adventures and overgrown jungles to salsa dancing and spontaneous combustion, there’s plenty of new gameplay for your Sims to enjoy in The Sims 4 Jungle Adventure Game Pack. But what does this Game Pack have to offer for those players who would rather build a temple than explore one? I have been playing around with this Pack’s Build Mode to show you just a few ways you can make the most of Selvadorada and the objects that came with it!

Selvadorada’s jungle canopies, high cliffs, and amazing scenery make this new world the perfect location for a treehouse. Using the pack’s new plants, trees and surplus of wood-tones, I was able to create a decently sized holiday home that fits right in with its Selvadoradian surroundings. 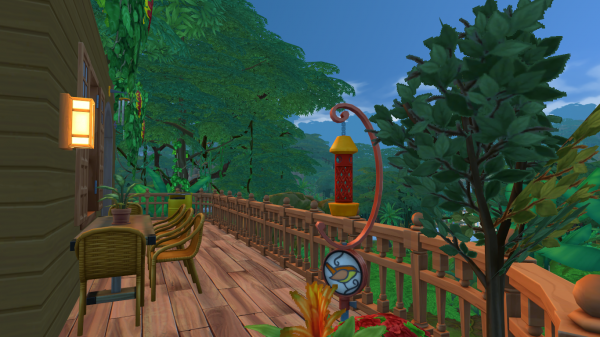 I started this build by grabbing out one of the new trees that came with Jungle Adventure. For a treehouse build you’re going to want to find the tallest tree possible so that you can insure you’ll have enough space to build a structure around the trunk. Sometimes this means resorting to the Resize Cheat, but, luckily, this tree was tall enough already. One of my favourite things about this tree are the flowers and vines that loop around tree’s trunk. They fit well with the style of Selvadorada and add some colourful detail to the rooms where the tree is visible. 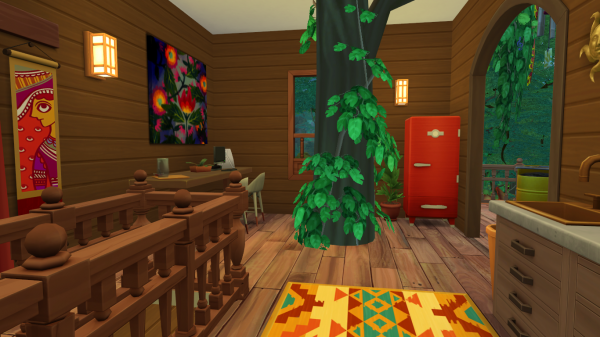 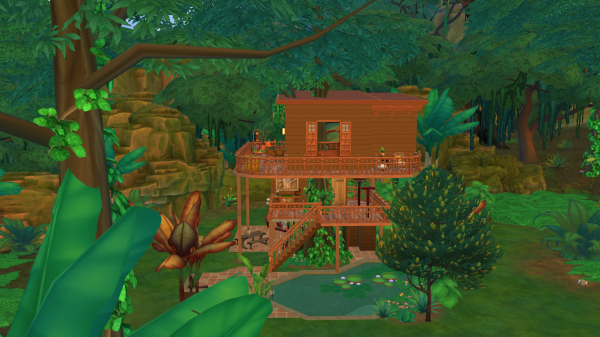 When building a treehouse, the first thing you’ll need to do is enable MoveObjects. This will stop your game from automatically deleting the tree whenever you attempt to build around it. To begin with you’ll need to build a room around the base of the tree. Onto this, add a second, third, or even a fourth level — as long as the build isn’t taller than the tree, anything goes! To make the structure look like a proper treehouse, delete the lower level so the rest of the building is floating. From here you’ll be able to play around with the shape and size of the build, and add balconies, staircases and supporting pillars. 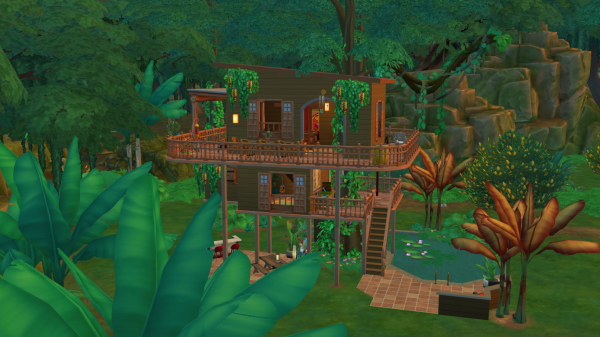 I decided to leave a lot of the spaces open in this build, using the game pack’s new windows (which don’t have glass) and archways rather than doors or traditional windows. This not only matches the tropical climate of Selvadorada, but it also helps to blend the build’s interior and exterior spaces. The addition of overhanging plants to a few of walls similarly assisted in bringing the outside in, making it appear as if the tree had grown throughout the structure. 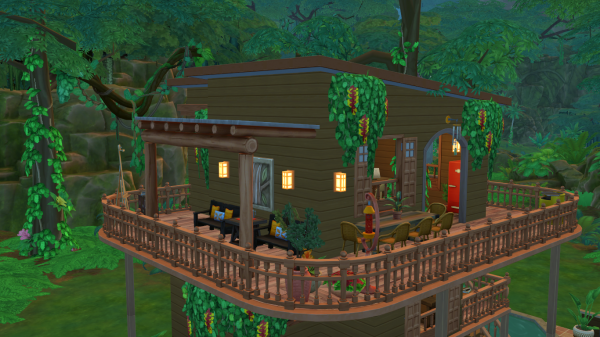 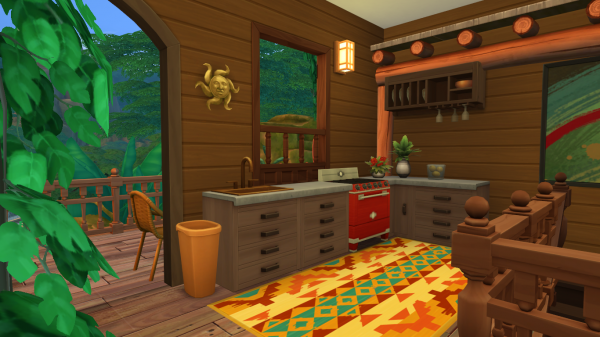 The furniture and objects that come with The Sims 4 Jungle Adventure tend to be super colourful, meaning it’s easier than ever to create a space that feels bright and vibrant. I found that City Living, with its quirky and gaudy objects, works particularly well with this Game Pack. Laundry Day Stuff also suits the Selvadoradian style. With its wood-tones and natural looking items, I found myself reaching for this Pack quite often during the building process. The wicker chairs look right at home in the jungle! 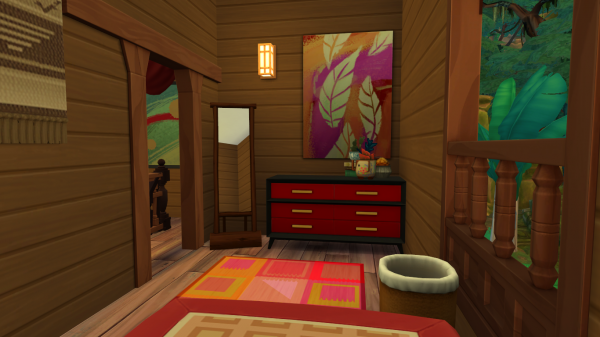 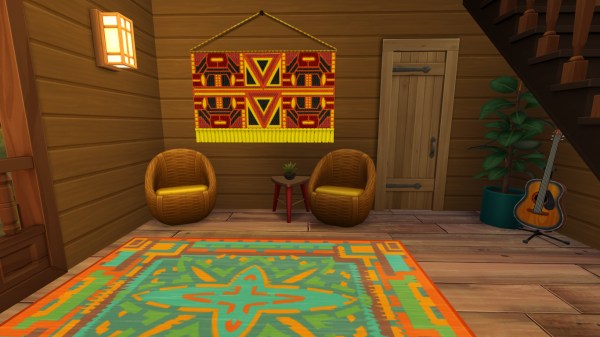 The Sims 4 Jungle Adventure comes with a whole host of items that are perfect for creating a long-forgotten temple or ancient ruins. Statues, broken pots, and even a skeleton or two, can be used to build impressive structures for your more adventurous Sims to explore! 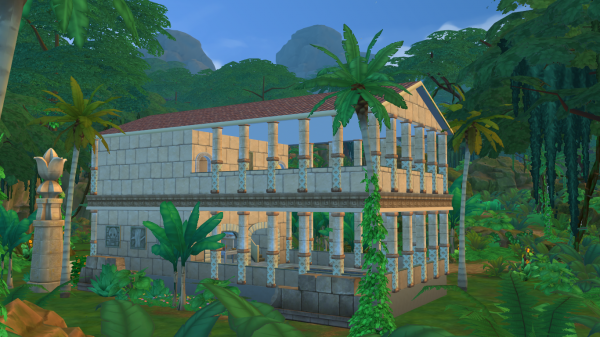 I really wanted to try my hand at creating something that utilised these new objects, but I didn’t want to end up simply remaking one of the Sims team’s creations. Because of this, I settled on creating an ancient building that looks as if it has been recently refurbished. Instead of leaving the build in ruins, I styled the space as if it had been converted into a museum. I added a front desk, display cabinets and some velvet rope to insure the visitors are kept away from the artefacts! 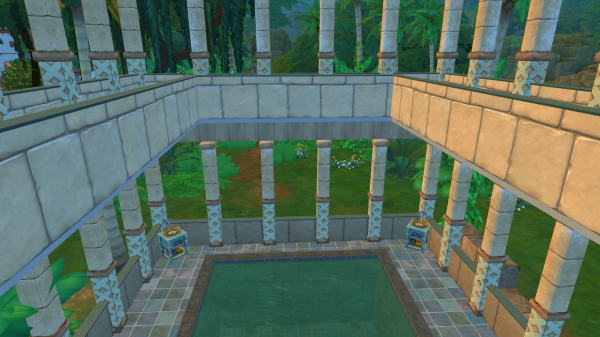 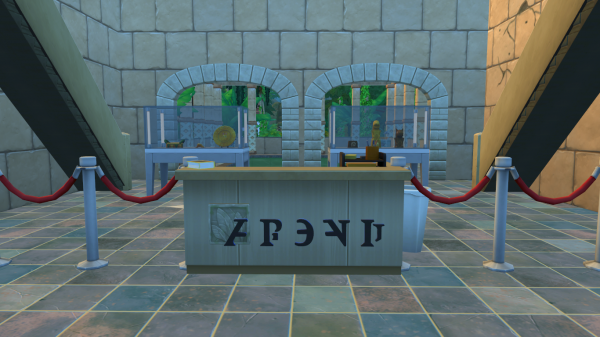 Some of the most fun I had when building this museum was creating the logo. Using MoveObjects and the Alt Key (which allows you to place objects off grid), I attached a sign from Get to Work and a piece of wall art from Jungle Adventure onto one of the blank signposts from Dine Out. This was super easy to achieve and gave the space a professional and commercial feel. By replicating this process on the museum’s front desk, I was able to establish a sense of branding, making the build feel that little bit more realistic! 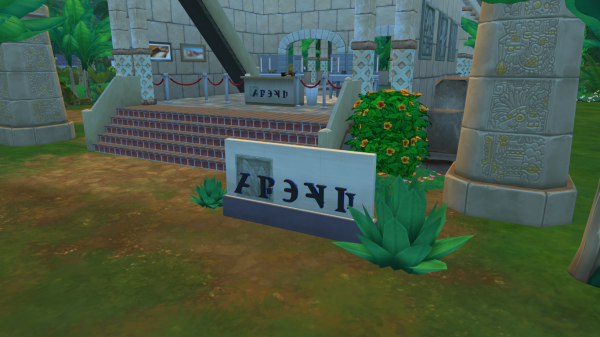 I filled the shelves of the museum’s display cabinets with artefacts from BuydeBug. Entering bb.showhiddenobjects into the cheat bar will unlock a selection of items that are normally only accessible through gameplay. By typing Debug into the search bar (and spending a little while scrolling through the catalogue) I was able to find golden plates, statues and ornaments, and add them to my exhibitions. 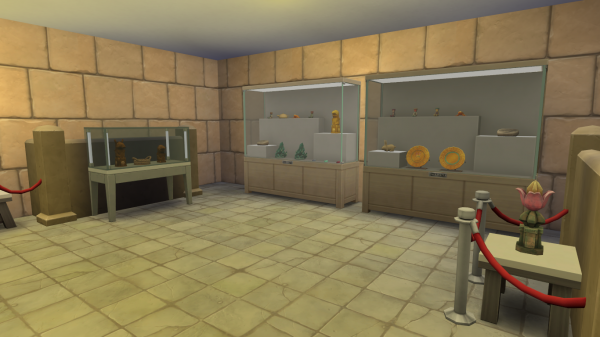 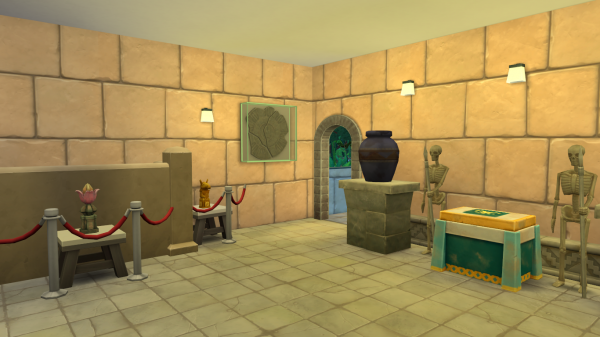 There are plenty of ways the objects from this Game Pack can be used outside of Selvadorada. Inspired by the Game Pack’s new sinks and wall coverings, I created this Grecian style bathroom complete with a brackish water pool and a fountain. 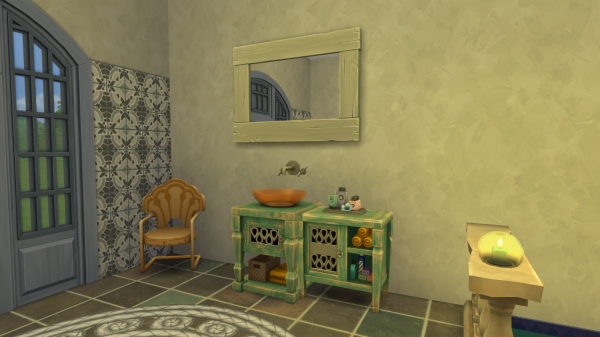 As Jungle Adventure does not come with a full bathroom set, I was forced to experiment with items from other DLC until I found something that matched. Although the Pack does feature a bathtub, it’s modern style felt slightly out of place in this bathroom, so I opted for the tub from Cats and Dogs instead. This turned out to be a great decision. The swatch I chose matched perfectly with the shower and sink from Jungle Adventure and added to the elegance of the space. 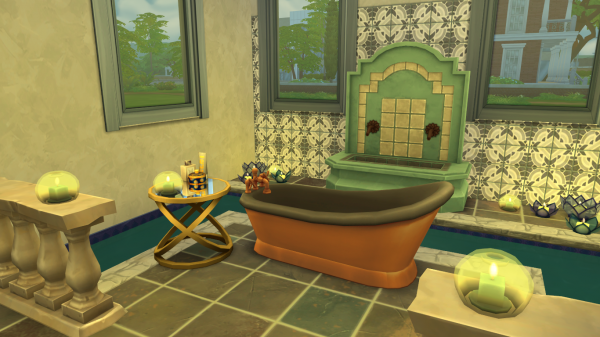 One of my favourite aspects of this Pack is the new kitchen cabinets. Although they come with plenty of muted swatches, this bright yellow option is great for modern builds and isn’t something we’ve seen before in the game. I had a lot of fun crafting a super vibrant Kitchen and Living Room around these counters, using as many bright colours and bold items as possible! 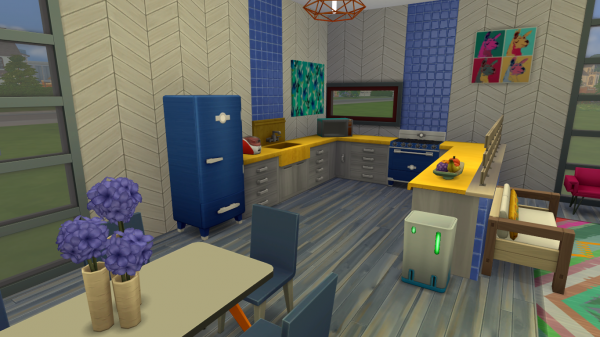 I also love the Pack’s new fridge and cooker. With a fashionable and modern feel, these are items that I know I will use time and time again. They also come with a large number of swatches, meaning they’re sure to fit well in variety of spaces. 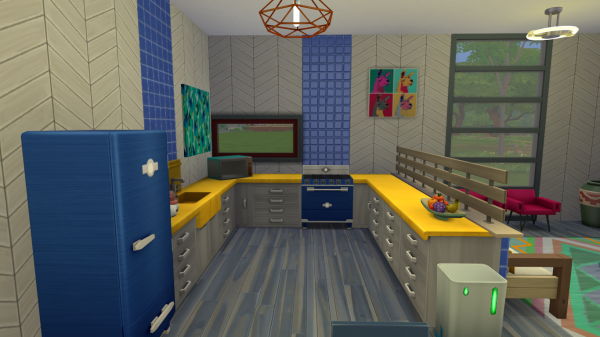 Making the most of a new Game Pack is all about exploring what’s on offer and experimenting with how objects can be used. Don’t feel restricted by the Pack’s theme, be innovative and try something different! Happy Building!